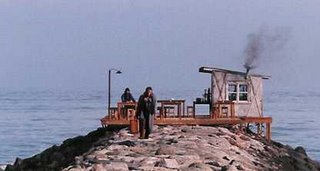 A sleepy, seaside Iranian town. A successful restaurant being run by four feisty, independent women. Everything is running smoothly until one womans lover gets arrested for anti-national activities, and anothers returns after being in prison for 25 years for the same charge, possibly to reclaim the house in which the restaurant is being run.

Aziz, a recently released convict who is on his way home, makes friends with Reza, a young man working on a fish farm. The cab is stopped, and Reza is arrested. The look at Reza gives Aziz reminds him of his own arrest 25 years ago. He reaches town to find his old home to find that it is now a restaurant, and walks in. 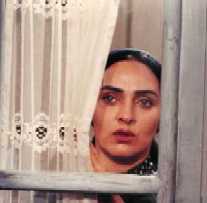 The scene shifts to inside the kitchen, where Atieh, Aziz’ ex-lover is busy preparing meals, assited by three other women, one of whom is Atieh’s daugther and Reza’s lover. The sky seems to fall on their heads as, though a pane in the door, Atieh spies Aziz in disbelief. The house is his, and they’re squatters. If they lose the restaurant, they lose everything.

Aziz is the central character of the film, even when he is not on screen. Everybod

y’s talking about him and wondering about his next move. Will he sell, or won’t he? He takes it upon himself to get Reza freed, and asks his rich friend who wants to buy the house, to get him a lawyer. This fuels rumours that Aziz is planning to sell the restaurant to his friends, and the women of the restaurant do whatever is possible to prevent it: mostly, of feeding him the most delicious looking food that you will ever see on screen, and of making him feel a part of the family.

The movie is, above all, about food. Watching it makes you regret having that rajma chawal or chicken biryani at the canteen, as dish after this is prepared with appetising sauces and photo-perfect garnishing. My mouth waters even as I think about that food. Must go to north Iran some day, and see if that food tastes as good as it looks.

Throughout the film, a lack of communication between two former lovers, Atieh and Aziz, confounds the issues. Atieh is full of pride, and unwilling to request Aziz to not sell or claim the house, even though he has not once asked for it. In fact, that he hardly speaks about it makes things confusing for the four women, as they try to get him to no sell it. There is also veiled criticism of a social practice – when men are sent to jail, their lovers are simply informed that they have skipped town. That happened when Aziz was arrested and Atieh was lied to, and when Reza was arrested. Also of young men who are forced into (supposedly) transporting arms because alternative occupations don’t yield enough money. 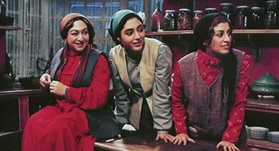 When Fish Fall in Love (mahiha ashegh mishavand) has a tight, small script centered around few characters and few events, but the suspense, the excitement and the emotions ensure that there’s not a dull moment. The title, though, doesn’t make much sense to me. The picturisation is rich in colour, with food that makes you want to chew at the screen, green mountains, colourful fruits and even the sea splashing against a precarious cafe on the rocks. I’m glad that Makhmalbaf’s ‘Sex and Philosophy’ was housefull.

The Fish Fall in Love (or When Fish fall in love – two names in use) won the Best Film award at the 7th Aubagne International Film Festival. What surprises me is that this is Ali Raffi’s first film, since it has the touch of a veteran. Many more beautiful stories to come, I hope.

Update: Another review, with spoiler (here). I disagree with the review that Aziz should not have been emotionless and confused, since that actually creates the suspense that runs through the movie. Secondly, Ali Raffi is a veteran theatre director and this is first film. His next is based on Romeo and Juliet.

One Theatre Ticket To Give Away