Osian’s Cinefan Film Fest: The Scream of the Ants by Mohsen Makhmalbaf

The basic message of Makhmalbaf‘s latest, The Scream of the Ants (Shaere Zobale-Ha) is as follows:

The Scream of the Ants starts promisingly enough: An Iranian couple wait, with the wife sitting on a chair and the husband loitering about, in the middle of a railway track. The wife has a glove stuck to her face (attached to her sunglasses, we later find out), to keep the sun out: a quirky beginning. They stop a train, get on, and sitting by the window, argue about God and religion. A seemingly lecherous journalist butts in and starts a conversation with the wife about tourists in India. All tourists who come to India are stupid, he says prudently.

The journalist informs the couple that the train is headed straight for a baba, a holy man, who can supposedly stop the train with his eyes. Sure enough, the journalist and the couple hang out of the train, and spot a half naked sadhu with his hands raised, The train slows to a halt near him, and to celebrate the baba’s miracle, a few thousand beggars converge on the train to accept alms from the passengers. 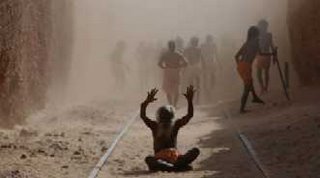 His secret: none. One day, disillusioned, he had squatted on the track to commit suicide, and the driver stopped the train himself. The beggars caught on, and proclaimed it a miracle to collect alms. Since then, the poor old man is a hostage to the beggars’ greed, and the drivers don’t take a risk and stop the train. The couple then try to rescue him, but are powerless against the crowd. A remarkable beginning. This is going to be fun, I thought. I couldn’t have been more wrong.

The scene shifts to Rajasthan where the wife and husband quarrel over religious beliefs, and the want of a child. He doesn’t want to bring a child into this miserable world, he says, and walks out,straight into the arms of a prostitute with a call center accent.

What follows then should go down in history as the weirdest scene ever (you’re free so disagree and tell me about weirder scenes) where our man talks weird religious mumbo jumbo to the prostitute, makes her his table (no, seriously). He drinks alcohol from a glass kept on her naked back, and then talks about the cow god. Now drunk or mentally retarded (or both, for his sake), he proceeds to pour alcohol on a statue of the cow god and drinks it. Don’t believe me? See this:

No prizes for guessing who this fascination with cows reminded me of?

We suddenly switch to a scene in the desert. The wife is in search of the Perfect Man, and it seems, everyone has heard of him.

Wife: Do you know where the Perfect Man lives?
Random Person: He lives there. (points)

Wife: Do you know where the Perfect Man lives?
He-Man: By the power of GraySkull. There (points)

(Note:I made the last one up, but I wouldn’t have put it beyond Makhmalbaf to add that scene to this movie. Probably cut it in the editing)

The taxi driver is willing to forgo a fare tells them that they ought to walk to him. How often have you seen the perfect man? they ask the Cow Man, a buddhist by the looks of it, as he takes them to the Perfect Man. Very few times, he tells them. When they reach the cottage, it seems that The Cow Man = The Perfect Man, and he only has seen the perfect man very few times because he doesn’t keep a mirror. Right. Mr. Perfect Man, as the wife calls him, writes something on a piece of paper and tells the wife to heat it in the holy city, over fire, after three days.

In the Holy City, they meet the Shit Man, who thinks everything is shit. We’re subjected to images of burning bodies, and decayed corpses flowing in the Ganga, as people take dips to purify themselves. There’s lots of philosophical, psychotic gyan, and the Shit man keeps saying that everything is shit, with a German accent. The two thirds of the film (post the baba stopping the train) is full of religious mumbo jumbo about life, sex, birth, rebirth and possibly the result of reading too many Osho magzines. Some old woman says that she wants freedom from the birth-rebirth cycle, and the audience goes – What shit? in a German accent. Everything is shit anyway.

Somewhere, the wife remembers that she’s got a letter to read, and with some more philosophical religious couplet, the movie ends.

Is it just a co-incidence that the direct tranlsation of the movie’s title in arabic is ‘Poet of the waste’?

P.s.2:
During the scene with the nude prostitute as a table, several cops came into the theatre. Others noisily went to call the rest, repeatedly disturbing those who sat close to the exits. No probs. After all, cops also have a right to watch sex scenes while on duty.

One Theatre Ticket To Give Away