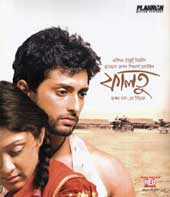 Anjan Das’ Faltu , which means ‘useless’ in Hindi, is a story that could have been told better. Adapted from Bengali author Syed Mustafa Siraj’s novel Ranirghater Brittanto, Faltu is set in rural Bengal, in a small village called Ranirght that has a population of 148, according to the census mentioned in the movie.

A visit from a census officer to the village (Ranirghat) after over twenty years sets the cat among the pigeons, when he asks about a pregnant madwoman called Surikhepi who had been there the last time he had visited. Surikhepi, at that time, had been in the village for over a year, and it was thus obvious that someone from the village had impregnated her. He also asks about Faltu’s father, the fathers name being essential for the census.

As the story unfolds, we’re told, not to discreetly, that Faltu has many fathers, and a majority of the village men and a dacoit had had their way with the mad woman. Unfortunately, while the audience can easily come to this realisation by the time a quarter of the movie has lapsed, the writers emphasise and re-emphasise this fact by repeatedly showing bits and pieces of how each major character went about this sin. In between, we get glimpses of how the entire village (and possibly all of Faltu’s guilt-afflicted fathers) has helped bring the young boy up, and how the dimwitted lad of around 20 goes from guilty person to guilty person in the village, trying to find out who his father is. Ibrahim, the dacoit, also remembers him on his release from jail, and offers him some sweets.

Beyond a point, this entire exercise becomes pointless and the movie is at least three times longer than it could have been. I amused myself by cracking jokes, calling the congregation of Faltu’s fathers ‘Surikhepi Anonymous’, among other jokes. Also wondered if Arindam Chaudhary had done a cameo in the film (his company Planman, produced it), and tried to spot him in various scenes. If things get really boring, which they might, you may also joke about the subtitles.

It’s sick and amusing that everyone knows what the they’ve all done, and since they’re all guilty, no one is open to talking about it. No one makes a confession, no one accuses, and they all share responsibility. There is one scene where three of Faltu’s fathers dote over him as he eats a meal, and all talk lovingly to him about his marriage to Tuktuki, the village belle. And all turn silent when Faltu asks them about his father. The suspense of what will happen when young, dumb Faltu finds out who his fathers are, runs through the entire movie. Given that there was no DNA testing at the time, it’s impossible to zoom in on one. There is also an additional problem of the village being destroyed to construct a bridge, but that’s inconsequential to the main story.

Fortunately, the acting was quite good- even Faltu played the dumb village guy role quite well (intentionally, I hope). But the two characters on the promos and posters were the weakest actors of the lot. The story was stretched, and hence very boring and repititive beyond a point. I liked the camerawork, the way it zoomed into trees, the river and rice fields. Jabberwock thought it was gimmicky. I’m a noob.

I can’t tell you how it ended because we got up before the end to switch to a greater disaster – It Could Be You.

[Note: Images here are taken via Google Imagesearch. If an image is yours and you mind, let me know and I’ll remove it. This applies to the rest of the blog too.]