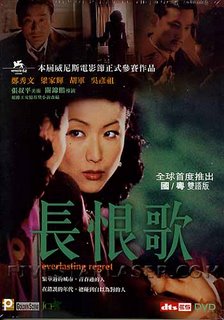 [Note: I went for this movie because I was told that a Stanley Kwan movie would at least be better than the last two that I had seen. Anyway, I didn’t want to give up on the Cinefan Film Fest after watching only the Indian films, which had given me a headache]

Stanley Kwan’s Everlasting Regret is the story of Qiyao (Sammi Cheng), a quiet young girl who becomes Ms. Shanghai in pre-communist China, quite by chance. She is naive to begin with, and nagged often by her schoolmate Lili (Yan Su), who considers herself far more beautiful than Qiyao. However, Cheng (Tony Leung Ka-Fai), a photographer of some importance, chooses Qiyao over Lili much to the latters disappointment. Cheng asks Qiyou her to enter the Ms. Shanghai competition. Officer Li, an officer of some importance, takes a liking to her at the competition, and with his influence, she becomes Ms.Shanghai. Important people seem to like Qiyao.

The movie then jumps to a remarkably different looking Qiyao who is the mistress of Officer Li. The two are deeply in love with each other. Everything is hunky dory until the communist revolution begins: Officer Li has to go underground, Lili eventually flees to Hong Kong and gets married. Only Cheng remains as a faithful friend to Qiyao. The screenplay jumps as abruptly as Qiyao does from one relationship to another, and I found myself quite lost in bits, trying to understand what was going on. ( With frequent hairstyle changes, and the relative inability to distinguish between various Asian characters, this was a difficult film to watch. I guess I need to watch more Asian cinema. ) 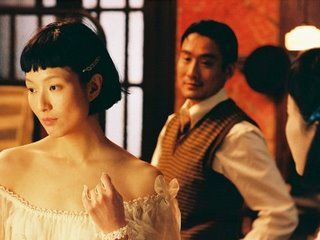 Qiyao is told of Li’s death by Cheng, which he immediately confesses as a lie that Li had asked him to tell her. She has to give up her beautiful apartment to the People’s Republic of China. At some point, Cheng leaves for rural areas to help in reconstruction, and returns briefly. When Lili comes over from Hong Kong, Qiyao is involved with a young man, Ming, the son of a businessman. Qiyao has a child off him, and is forced to arrange for a fake marriage because Ming is unable to marry her. He leaves for Hong Kong, but continues to send her money. Officer Li, she’s told, owns a ranch in Brazil, but she never pursues him. Qiyao’s daugther gets married at a young age, and flees to the US with her husband. Then a black-marketeer called Kela falls for Qiyao, while Cheng, who introduced the two, watches on haplessly. That relationship ends disastrously too.

I loved the whole sepia-tone feel of the movie, and the music. At times, the music was most pleasant when the scene was most grim: Qiyao went into pangs of anguish on being told by Cheng about Li’s death; the anguish could have been best depicted by allowing Qiyao’s screams to reverberate through the theatre in isolation. Unfortunately, a happy-happy jive tune kills the pain. 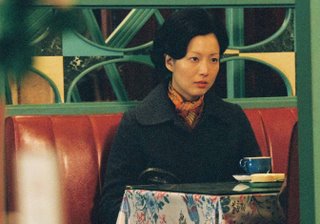 Tony Leung Ka-Fai, who played Cheng was the most powerful presence on screen. Sammy Cheng as Qiyao was disappointing only because Qiyao’s character wasn’t explored. The scene jumped from one segment to another without a connection, or an adequate follow up.

In fact, the only relationship that is developed in the novel is that which remained unfulfilled – between Qiyao and Cheng. They remained friends, and either because of Qiyao’s unwillingness to take it further, or Cheng’s need for survival and apparent lack of financial resources, the ‘Everlasting Regret’ in the film is that of Cheng, the narrator. It must have been a wonderful book, but was a disappointing movie.

(Also: On the way out, I overheard one middle aged woman telling another about how Qiyao managed to look so young through the ages and attract men much younger than her.)