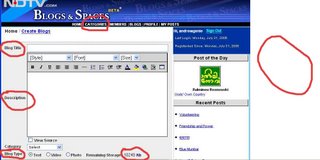 * Blogs on a domain separate from NDTV.com: In an attempt to get ahead of IBNLive which had initially intended to allow users to post, NDTV allows you to register and host your blog at www.ndtvblogs.com. In my opinion, that’s a mistake because the nature of the blogger is that he wants to own his space. He might want contribute to the media, call himself a part of the new media, but he wants to own his space. I’m not shifting bag and baggage to NDTV or IBN, just because it gives me greater visibility, and sacrifice the freedom to post stupid posts. My space will be mine, and I don’t want to have to sign into two blog sites and post.

I liked the IBN Your Voice concept (now in hibernation) better, but that’s probably a real pain to update because it means having to read a lot of blogs.

* Tagging and Advertising: the link at top lists tags/categories. These lead to a page with aggregated posts (ala Technorati). That means that better targeting for Google Adwords (once they’re implemented), and hence possibly greater revenue, or even tieups. The advertising model seems, on the face of it, to be well thought out. Try Asbestos as a category sometime. *grin*

Also, there’s lots of whitespace on the right (encircled in the image above), obviously for advertisements. 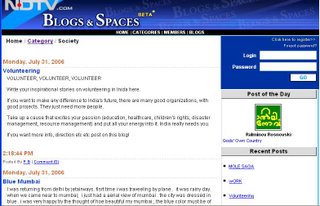 * Post Moderation: So, I might get the opportunity to blog alongside Barkha Dutt (not that I want to), but my posts will be moderated. What are the moderation policies? Will I be allowed to diss NDTV on their blogs? Also, dont get fooled by the random posts that they have allowed. They’re just there because they need posts initially while they’re developing the portal.

Question – why not tie up with an experienced Blog host (if you want to go Indian) like Rediff to develop the same?

* Allows you to host 10240 kb of video/audio/photo, but – per post, per attachment or per blog? I don’t know. I got signed out automatically.

I’m not sure of what they’re banking on – getting new users to blog or making bloggers switch to NDTV Blogs? (I can imagine Vikram Chandra saying on TV that – now you can host your blog at NDTV Blogs and we will make sure it doesn’t get banned)

Anyway, this is cliche’d Web 2.0. A post on Web 2.0 and the crowded social networking website segment, next.

A different version crossposted at ContentSutra. My first there. 🙂