Been a while since I wrote about football…and this is interesting. Roy Keane’s taken over as coach of Sunderland…not that Mick McCarthy did much. Given the history that Keano’s had with Mick, I’m sure he’ll push himself to do better.

What’s in Keano’s favour? He’s passionate about winning, and hates to lose. The windspeed in the Sunderland dressing room should rival the famous ManUtd hairdryer. The difference is that Keano’s always been a player who’s lifted his team by giving it his all on the football pitch. Being a coach could be even more frustrating for him than sitting on the bench. I’m going to track Sunderland now, and see how he does. 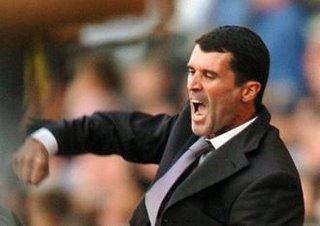 Also, I’m wondering what Glasgow Celtic got from signing up Keane – he was out injured for almost the entire season, and I think he only played in his own testimonial at Old Trafford. Though I’m a fan of his, the Roy Keane signing looks like a waste of money for Celtic to me; the fans shouldn’t be too pleased.

Sunderland fans must be edgy – they got relegated with hardly a win, and Keane comes in as a very experienced player, but an inexperienced manager; the best players don’t always make the best managers – and football is a lot about man management. Keane should know – he must have been very tough to manage with his mercurial temper.

And what has he done, just days after taking over Sunderland? Signed up some big names – former ManU striker Dwight Yorke from Sydney FC, Irish international Liam Miller (who was supposed to be the new Roy Keane, but hardly ever got a game), Kavanagh from Wigan, Stanislav Varga from Celtic.

Do you see a trend? Reminds me of what Manuel Pellegrini did with Villarreal by signing up some talented players who weren’t getting their due in their respective clubs. Give the importance, the belief and the opportunity and watch them fight against the best. Now Kavanagh and Varga are both big, imposing figures in the midfield. Perfect buys for Sunderland, imho, since they will not be easy to push, or run around. Also in are Ross Wallace from Celtic and David Connolly, another Irish international. So, that’s Yorke and Miller from Keane’s association with ManUtd; Kavanagh and Connolly from Ireland, and Ross Wallace and Varga from Celtic. All players with whom Keane has been associated in the past. Will it work? Well, as Keano said: “I am here to win football matches. When you do that, everything thing else takes care of itself.”

Do not press the red button