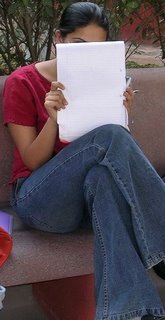 Aishwarya has completed two years of blogging at Kaleidoglide, where she blogs about random feminist stuff. Mixedbag.in caught up with Aishwarya and spoke to her about stardom, exposing and ducks:

In pic- Aishwarya, woman of mystery. Behind park bench: mystery.

Nikhil: So, how does it feel to have completed two years of blogging?
bluelullaby: amazing. I never thought I could do it! I thought it would be so hard to expose my inner thoughts and fillings
Nikhil: And do you feel sufficiently exposed after two years of doing this?
bluelullaby: yes, I an now very comfortable with exposing myself.
Nikhil: How have people reacted to it?
bluelullaby: the response from my juniors in college has been fantastic!
Nikhil: Have you been emulated? Is a full college planning to expose themselves online?
bluelullaby: only a few people. The rest prefer to watch
Nikhil: And those who do not know you personally…those who know you only via your blog – how have they reacted?
bluelullaby: their response has been very encouraging. sometimes people are abusive, but I realise that’s only jealousy
Nikhil: Do you think their reaction is representative of society in general – that people aren’t quite ready for this sort of a thing?
bluelullaby: possibly. we live in a very conservative society, but if you think about it indian culture gives an important place to women!
Nikhil: Metaphorically speaking, why did you paint that duck pink?
bluelullaby: *giggles *
Nikhil: No really. The world needs to know…
bluelullaby: a girl has to have SOME secrets!
Nikhil: You’re just ducking the issue. We’ve already tried our level best to find out… but the duck just wont quack.
bluelullaby: …well.Pink is such a feminist colour, no?
Nikhil: I wouldn’t know..but go on.
bluelullaby: and ducks are female
Nikhil: But not all ducks are female
bluelullaby: yes they are. You see, male duck are called drakes
Nikhil: rumour has it that the duck promised to make you a muwi star, and hasn’t delivered yet
bluelullaby: *gasp * who told you?
Nikhil: we have our sources.
bluelullaby: All lies, I tell you! The tabloids will say anything. Just because I am willing to expose myself they want to ruin me
Nikhil: Also, have you recently received any emails telling you that you’ve won the Euro Clubs Promo Org prize?
bluelullaby: none, why?
Nikhil: Because I just did. Just checking…anyway, back to you. How does it feel to have completed three years of blogging?
bluelullaby: two, but
Nikhil: Oh yes. And we’ve already covered this question, haven’t we. That’s about it, then. Thanks for talking to MixedBag.

Aishwarya also mentioned that she has curly hair. Next, we shall try to get Jai Arjun Singh to talk about Aishwarya’s fillings because, as she puts it “everything must be about MEEEE!”