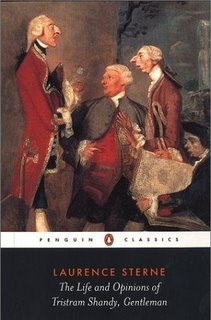 [Note: Spoilers in this review]

Lawrence Sterne’s Tristram Shandy [Google Books preview] was a difficult read, to say the least. It defied conventions of writing: probably the most frequently mentioned example is that a single black page in the book signifies the death of the parson, Yorick. Some chapters are just a short paragraph. The book begins with Tristram as an adult, a few pages later he is an infant; he is born in the middle of the novel, after which the rest of the novel concerns events that took place before his birth. It was amusing, though language didn’t make it an easy read. So when I read in a review that the book was considered unfilmable, I wasn’t particularly surprised.

Tristram Shandy: A Cock and Bull Story, directed by Michael Winterbottom is, unexpectedly, not a movie based on the novel, but about the filming process and the difficulties faced during film-making. It was similar at times to Topsy Turvy, but not half as amusing, and a lot more realistic. It is likely that a less informed audience might mistake this movie for a ‘Behind the Scenes’ preview, and could be left waiting for an hour and a half for the adaptation of the novel to be screened, lest they leave sooner. This is a movie made for the film fests.

The film depicts the complexities of film making and pressures that actors face, juggling both a career and a family life. At one point, Steve is simultaneously caught between ego problems due to the addition of Gillian Anderson to the cast (hence, another “star”), the expected increase in Rob Brydon’s role vis-a-vis his own, the problem of handling the movie-crazy Jennie, the runner whom he has made out with, a possible scandal concerning Steve and a lap dancer, and the demands of his girlfriend Jenny who’s travelled a couple of hundred miles with their baby, just to have sex with Steve. Not a comfortable situation to be in, you’ll agree. There’s also a question of the height of Steve’s boots, which he wants increased in comparison to that of Rob, since Steve is the star. He also considers a nose job, and wonders whether he has a character actors nose or a leading mans nose. 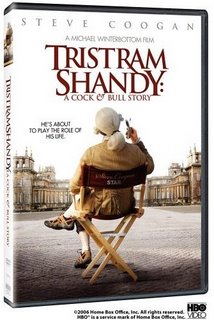 For me, the standout performance was from Naomie Harris as Jennie the runner, playing the part of a naive film-struck assistant to perfection. She lapses into glorification of scenes in movies, elaborating on their beauty, the symbolism and the metaphors – something we’re all guilty of from time to time. (No?) She also falls for Steve Coogan, which most of us are not guilty of, and exchanges a few star-struck kisses, only for Steve to suddenly realise that with one scandal not yet suppressed, he can’t really afford another. Jennie is made fun of behind her back, as probably most film crazy people are by the people who make films. Kelly MacDonald as Steve’s girlfriend plays the domesticated girlfriend to perfection.

There’s subtle humour, a few faux pas’, Groucho Marx references and brushings off. Steve Coogan is helped while practicing a scene where a hot chestnut drops down the protagonists pants by actually having a hot chestnut dropped down his pants. He also hangs upside down in a gigantic womb, in the nude.

Then there’s a little about attraction between actors when Rob Brydon learns that Gillian Anderson might play his Toby Shandy’s love interest:

The perfectionists and experts are also parodied: an expert on history asks the cast about a particular battle scene. Not sure of how to respond, they play it safe and say that the battle scene was quite good, only to be shot down with a Shite. It was shite from beginning to end. Woefully inaccurate. We wouldn’t be interested in doing a pantomine like that. This was in addition to a lecture on how to make the battle scene in Tristram Shandy more realistic (give the actors names of actual men who fought the battle, and have them shout it out in the movie), all of which seems inconsequential to the final film.

In Tristram Shandy: A Cock and Bull Story, there are few obvious links with the book – a few scenes from the movie as well as their filming is shown, the filming of the black page is discussed, even though Yorick doesn’t feature in the movie. The real connection with the novel is in the complexity and the biographical nature of the movie. It’s more engaging than entertaining, while the book was exactly the opposite.

The most remarkable thing about this movie, strangely enough, is its website. Even if you don’t see the movie, or read the book, just go through the site for its sheer inventiveness. Looks exactly like a desktop, with all the icons. In true Tristram Shandy style, you’re greeted with windows with email messages from those who’re behind the site. Click on the recycle bin to see samples of discarded designs for the site and movie posters. Click on the MS Outlook icon for ’email’ to read informal messages sent to the designer. A click on ‘Tristram pix’ lets you see captures from the movie. A desktop feel and functionality, and a brilliant concept and design.

Osian’s Cinefan Film Fest: It Could Be You